Haridwar, the world-famous centers of pilgrimage and gate-way to the devbhoomi (the land of the gods)—Uttarakhand, is a city of temples. There are innumerable places here that bear the footprints of one god or the other and which have been hallowed by their lilas (divine activities) and later on their temples were built to consecrate their memories. The most famous temple of the holy city, which is one of its identity markers, is the Daksheshwar Mahadev Temple Kankhal, about 6 km from Har-Ki-Pauri, at the southern periphery of the city.

Haridwar is one of the most ancient cities in the world. Its original name was Mayapuri and it is mentioned in all our ancient Vedas and Puranas. The small town of Kankhal is very close to Haridwar and it has a beautiful temple to Shiva which is known as the Daksha Prajapati Mandir or Daksha Mahadev Temple. 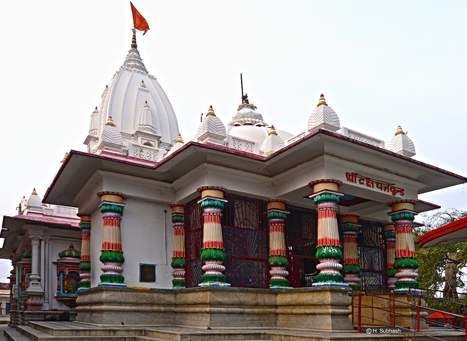 The genesis of the temple lies in the mythological story narrated in the Shiv Purana. As an answer to the prayer of Brahma, one of the trinity of the Hindu gods, Jagdamba or Bhagwati (the supreme shakti) took birth as Sati. She was born in the form of the daughter of his son, Daksh Prajapati who had his kingdom at Kankhal. As per legends, Sati performed hard and long Tapasya (worship) to please Lord Shiva to wed her. At last, the Lord consented to marry her. However, later on, strains developed in the relationship of King Daksh and his son-in-law. Shiv Purana narrates how once King Daksh organized a big yajna at Kankhal and invited all the gods, rishis, and munis to the ritual, but ignored his son-in-law. When Sati came to know of the function, she prevailed on Lord Shiva to allow her to go there.

During the function, her father uttered insulting words for Lord Shiva. At this, Sati was so infuriated that she consigned herself to the flames of the yajna. As the tragic news reached Lord Shiva, he sent Veerbhadra, one of his bravest warriors to Kanakhal. Verbhadra chopped off the head of King Daksh and annihilated it in the fire of the yajna. On the request of all the gods, including Lord Vishnu, Lord Shiva appeared there as the self-created linga. The benevolent Lord Shiva, in order to complete the yajna that had been disrupted, restored King Daksh to life by putting the head of a male goat on the shoulders of his corpse. King Daksh repented his misdeeds. Then Lord Shiva declared that every year. during the month of Sayan, the month that is dearest to the Lord, Kankhal would be His abode. After this, the grief-stricken Lord Shiva wandered across the universe, carrying the dead body of his consort.

The myths say that Lord Vishnu, with his Sudarshan chakra, chopped off the parts of Sati’s dead body in order to separate it from Lord Shiva and free him from his deep mourning. The places where the severed part’s body dropped on the earth, later on, became shakti peeths and came to be revered. Temples came up at the place at Kankhal where this epochal event unfolded itself. Later on in 1810, the king of Landhora state, who had legal rights on the land, constructed a big temple here. This temple was renovated in 1963 by the Mahanirvan Akharas Kankhal, which now looks after the management of the temple. Mahant Ravindra Puri, the secretary of the akhara told HP that the temple symbolized the rich ancient cultural heritage of the country which needs to be preserved. The main Daksheshwar Temple, along with some other temples in the precinct, such as Hanuman Temple Dasham Vidya Temple, stands on the serene bank of a tributary of the Ganga at the foothills of the Shivalik Ranges.

One part of the Temple consists of the Yajna Kund, while in the other part, a Shiv Linga has been installed, which is worshipped by devotees by the offering of water. The entire story of the yajna of King Daksh and the following episodes have been vividly depicted on the walls of the temple. A very old banyan tree, which is said to be thousands of years old and is considered sacred, is also the cynosure of all the eyes in the precincts of the temple.

The temple lures lakhs of devotees from the country and abroad, round the year. However, there is a heavy rush of Lord Shiva devotees in the month of Sayan. On Shivratri, a large number of devotees congregate here to pay obeisance to the Lord and seek His blessings and benediction. “If a devotee pays oblation to Lord Shiva here with a sincere heart, he is blessed by the Lord and all his wishes are fulfilled,” says Pradeep a noted priest and astrologer of Kankhal.